Getting Excited for Windows 8 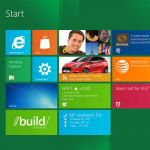 At Directive, we always look forward to checking out new gadgets and software, and since Microsoft's Windows 8 operating system is so fresh and unique compared with previous iterations, we are interested to see how it will impact businesses.

Windows 8 has a lot of unique capabilities that are new to Windows that we think are going to change the way companies do business. There have been mixed reviews since the Windows 8 Consumer Preview was made available a couple months ago; there have been some widely positive reviews, and negative reviews tend to slant towards the fact that Windows 8 feels like it might be stretching too thin trying to be both a desktop OS and a mobile device OS at once. However, this is the very reason Windows 8 is going to be huge for small and medium-sized businesses.

Finally Eliminate the Bridge between Desktop and Mobile

For the first time, Windows 8 will allow us to have the same platform on our desktop computer as we do on our mobile device. Gone are the days of drastically limited functionality, compatibility issues, and limited formatting for documents. What you use on your desktop and laptop will be on your tablet. While we are still several months away from seeing Windows 8 on consumer electronics and PCs (it's estimated that Windows 8 will be released around October 2012), the idea of a full-fledged Windows experience on a 7-inch tablet ultra-portable tablet is extremely attractive.

It's Windows but with Mobile Capabilities

Just because it's ready to run on a tablet doesn't mean they are skimping out on what makes Windows so great for businesses. Yes, features like touch screen optimization and a slick new interface built for finger swiping have been added, but nothing is being taken away. Windows 8 will see improvements to security features found in previous versions of Windows as well as even better group policies, virtualization and remote capabilities. From an IT standpoint, these are exciting features that will improve internal and external security and flexibility. While we've only been able to play with pre-released versions of Windows 8, so only time will tell, but for now we are excited to see some of the new features come into play for businesses.