How to Properly Handle the Stars and Stripes

IT Blog Off Topic/Fun
Chris Chase 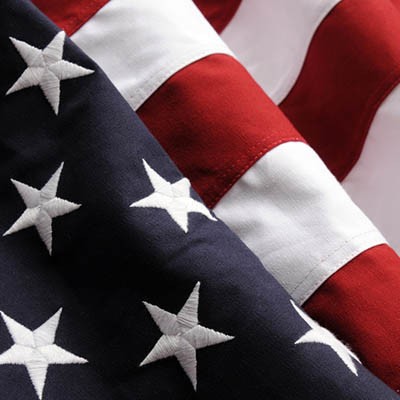 Old Glory, the Stars and Stripes, the Star Spangled Banner… whatever you call it, the flag of the United States of America is a symbol of this country’s history and its current unity. As such, there are proper ways to handle it… and many, many ways for it to be mishandled. Here, we’ve taken the liberty of outlining the proper etiquette for handling the flag, and how to properly dispose of it if necessary.

How to Properly Display the Flag

There are many, many regulations to follow when you are displaying the flag, as described in the U.S. Flag Code.

There is also a particular way to fold the flag properly. Watch this video for a demonstration.

Where to Display the Flag

If presented on a single flagpole or lanyard, the Stars and Stripes are to be raised above any other flag. If in a row of flags of other nations, the U.S. flag should be at the observer’s left, raised to an equal height as other flags. State and local flags shouldn’t be raised as high. The left-side rule also applies during parades or marching ceremonies.

If a flag is on a podium as someone is speaking, it should be the only flag to their right, while any others should be to their left.

If the flag is hanging flush to a wall, the blue field of stars (known as the union) should always be seen at the top-left corner of the flag. The same goes for any flags hung in a window. If a flag is being used to cover a casket, the union should be positioned over the head and left shoulder. In this case, the flag should not be lowered into the grave or allowed to touch the ground.

When to Display the Flag

The flag should not be displayed on days with unpleasant weather. It can be displayed for all hours of the day, assuming that it is fully lit when it is dark outside.

If weather permits, the flag should be presented every day, but especially these days:

How the Flag Shouldn’t Be Handled

As the flag is a symbol that carries the history of the nation, there needs to be respect in its care and handling. As such, there are also rules that disallow many uses and treatments of the flag.

For instance, as a symbol of the country as a whole, the flag should never be dipped to an individual, no matter how high they are in office, from the President down. The flag should also never touch the ground or floor, or anything else beneath it, including water or merchandise. Nothing should ever be placed upon the flag, and it shouldn’t be used to cover a ceiling. The flag should always be allowed to fall free. When stored, it shouldn’t be someplace it could get dirty.

The flag should never be put in a position where it may be easily damaged, and when handled, it should always be carried aloft and free. The only time the flag should ever be flown upside-down is to signal great distress. You should never deface the flag, or otherwise mark it.

In what is likely the most-broken rule of flag etiquette, the flag should never be used as a means of advertising, embroidered on cushions or handkerchiefs. It should also never be used as a costume, or printed on paper napkins or boxes. I’m sure we’ve all been to a barbecue that has broken at least one of these rules.

How to Properly Dispose of a Flag When the Time Comes

Eventually, a flag will become too worn out to be a fitting emblem and will have to be retired. Generally, this is done in a ceremonial burning. To do so, make sure the flag is properly folded, and the fire is large and intense enough to completely burn the flag. Once the flag is placed on the fire, recite the Pledge of Allegiance and have a moment of silence. Allow the flag to burn completely before extinguishing the flames and burying the ashes. Of course, this should all be done in accordance with local and state fire codes.

You can also drop off or mail your old flag to the American Legion Oneonta Vets Club at 279 Chestnut Street. They will take care of properly disposing of them for you.