The True Power of Social Media 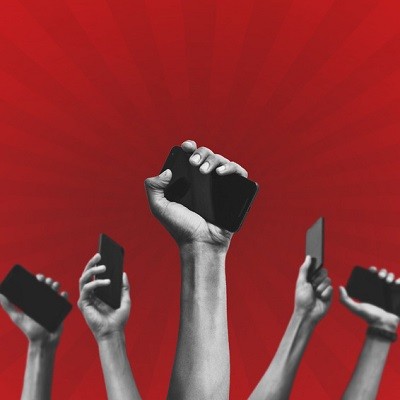 While it is common to consider social media just another form of entertainment or worse, an outlet for narcissistic behavior, it is for some one of the few outlets people have for their voices to be heard and listened to. A computer, tablet, smart phone and - as the IoT becomes more prevalent - even your appliances will allow average people to not only communicate with their ‘friends’, but with the world. While good social media practices are essential to many a business, we also need to recognize the power that social media brings to the people and by extension to your business.

When we think about democracy, we often refer to ideas such as having your vote counted. In other words, the ability to have the will of the people reflected in the government. However, democracy can also refer to your ability to hear and be heard. There’s a reason why freedom of speech is our First Amendment. However, the reality is for most of history, average people lacked the resources to have their voices heard in any significant way. This status quo began to change in 1440 with the Gutenberg Press.

Prior to the Gutenberg Press, illiteracy was the norm during the time period. The reasons were twofold: the process of creating books was extremely time-consuming as they had to be written by hand. This meant there were simply not enough books to go around, even if the majority of people could have read. Further, the church, for the most part, had a monopoly on literacy, as mainly the monks held the level of literacy needed to write books. So unless you were wealthy or had access to the church, your ability to read books was limited at best. This changed when Johan Gutenberg and his printing press helped cement the Renaissance by allowing books to be mass-produced. Widespread literacy and the ability for mass communication, in turn, increased the power of the people to take a more active hand in how their society operated. This is why the printing press is considered one of the most important pieces of technology in history.

Communication, One Desktop At A Time.

While the printing process remained a constant for more than five centuries, it changed in 1985 with the introduction of Desktop Publishing (DTP). Desktop Publishing was another in a long line of technologies which revolutionized how people communicated and the scope in which they could communicate with each other.

Prior to the introduction of DTP, the ability to produce printed literature could still be a specialized and expensive endeavor. Traditional print publishing processes depended on a variety of skilled labor, equipment, and techniques. Like the environment of monks that Gutenberg’s printer replaced, modern printing required a bevy of skilled professionals to mass-produce a high-quality product. Mechanical artists, phototypesetters, and a variety of photographic technology and printing processes were needed. Even if you wanted to print a one-page flyer, you would have to go to a print shop. DTP with the introduction of the laser printer, changed this, allowing for the average person to print in their own home or business.

Now, average people, from the comfort of their home, can create and distribute as much content as they wanted, without needing to go to an ‘established’ printer. This generated a wealth of opportunities for communication; everything from one-page flyers to full-color books could be created at the touch of a button and with the upcoming accessibility of email, communication with hundreds, thousands, and even more was possible. The most important aspect of this is that publishing was once again no longer the domain of the few.

From Print to the Cloud

We’re now in the age of Web 2.0, a technology designed from the ground up for public engagement and communication, as opposed to Web 1.0 in which the Internet was designed for a one-way conversation, which in reality was no conversation at all. The best example of Web 2.0 is social media, which has become the latest in a line of technological tools used by the masses to communicate outside the structure of professional distribution outlets. The primary way this affected business is that now they could communicate directly with customers. Moreover, customers could now actively interact with businesses.

This is not to say social media is the magic formula to human interaction; in fact, it is far from it, as we are painfully aware. Examples of negative behavior including anti-social, even anti-democratic practices are rife within the medium, leading to unintended consequences for people and businesses alike. Yet despite these justified concerns, social media is still one of the best ways to level the playing field and have your voice heard.

While your business may not be able to match the budget of a Fortune 500 company, you certainly can match their creativity and creation of content and ideas. In fact, it isn’t a far reach to realize as a smaller business, you may even have more flexibility to experiment and try new things, without the burden of a corporation weighing you down. Your success or failure can be determined by a jury of your peers and the free marketplace of ideas and not solely on who you know and how much money you have.

It doesn’t get more democratic than that.

More posts from author
Tuesday, August 30 2022 Keeping Your Business Agile Can Really Pay Off
Saturday, August 27 2022 Don’t Let Hackers Get the Best of You
Thursday, August 25 2022 The Pros and Cons of Cloud Reliance
Comment for this post has been locked by admin.