IT Wasn’t Always This Way: Let’s Look Back in Time When Technology Was “Simpler” 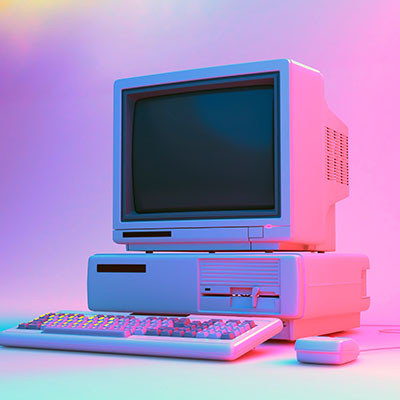 Who doesn’t love nostalgia? Throughout history, people have always looked back at the “good old days” and we wanted to explore some of the weird and wacky technologies and trends that didn’t quite stick the landing for the long run, and some that ended up unintentionally paving the way.

It’s been over two and a half decades since Windows 95 was released. For many, this was when Microsoft became a household name, and it was only a mere decade before that Bill Gates announced his goal to put a PC in every home.

What better spokespeople to show off your product than part of the cast of Friends.

It’s EXACTLY what you would expect it to be.

Back in 2004, some nerdy guy from Harvard named Mark Zuckerberg was interviewed on CNBC talking about a new website he made. We won’t go into the creepy origin story of thefacebook before it started emerging across college campuses, but by 2004, the website was starting to accept registrations from college students at SUNY Oneonta (this was a few years before the general public could create Facebook accounts).

Well, today, the same nerdy guy is one of the richest men on the planet, and he’s banking all of his efforts on getting everybody into virtual reality. It’s not looking very good so far, but how many people scoffed at Facebook as a passing fad when it first started gaining popularity?

Today, Facebook has nearly a third of the world’s population as monthly active users, while Zuckerberg’s new project, Metaverse, only has 8000 daily users.

Kids These Days are Lazy!

We hear this all the time—kids these days just don’t want to work, the young whippersnappers are lazy!

It doesn’t matter how old you are; if you are alive today, your elders have said the same thing about you! People have been talking smack about the younger generations for, well, generations!

In 2001, Time had this to say about the younger generation: “They crave entertainment, but their attention span is as short as one zap of a TV dial.”

The Clearwater Times in Florida printed a story about a shoe repair shop with the quote “Nobody wants to work anymore. They all want to work in front of a computer and make lots of money.”

An article in the Wall Street Journal in 1984 mentioned it about 35-year olds saying “They’re doing the kinds of things our society used to expect from 25-year-olds.”

In 1916, The Binghamton Press published an article with a headline that read “Nobody Wants to Work” in reference to food scarcity and prices around Thanksgiving. The person interviewed was on the record saying “Do you know where prices would go if we raised more calves and pigs, and made more butter? They would go way down.”

In 1624, clergyman Thomas Barnes complained in his book The Wise-Man’s Forecast against the Evill Time, “Youth were never more sawcie, yea never more savagely saucie…” which is probably my new favorite old-timey sentence.

He went on, “I find by sad Experience how the Towns and Streets are filled with lewd wicked Children, and many Children as they have played about the Streets have been heard to curse and swear and call one another Nick-names, and it would grieve ones Heart to hear what bawdy and filthy Communications proceeds from the Mouths of such…”

For the younger people reading this article, don’t worry, there’s a pretty good chance that you’ll be saying the same thing about the next generation in line. This definitely puts some things into perspective though; technology and innovation will continue to make improvements to how we work, but to the chagrin of those who had to do things the hard way.

When a Virus Said “I Love You”

Way back in the year 2000, a malicious virus spread across around 50 million computers within just over a week. It was estimated that around ten percent of all internet-connected computers were infected by it. It was called the Love Bug, or the ILOVEYOU virus. It showed the world just how important cybersecurity was, and how quickly a problem could spread. It caused the Pentagon, the CIA, and the U.K. Parliament to shut down their email systems, and had an economic impact of $10 billion.

Today, there are more than a billion malware programs out there, many of which spread across the Internet automatically, and many that are far more destructive than ILOVEYOU. They can ransom your business for money, they can steal from your bank account, they can wipe out all of your files and share them online.

We don’t think about how often we use technology to do everyday things (like ordering takeout). In 1974, you used to have to grab your stack of takeout menus, pick up the phone, and call in just to see if your favorite pizza place was open.

It was that year that Donald Sherman, who suffered from a neurological disorder that limited his ability to speak, used a computer designed by John Eulenberg to order a pizza. They tried Dominos, who immediately hung up on the synthesized voice, but Mr. Mike’s pizzeria came through and took the order.

The easy comparison to make here is just how easy it is to order food from your smartphone without talking to a human these days, but there’s something even more special about this story. The computer was used to aid in something that Donald Sherman wasn’t able to do himself. It goes far beyond just ordering a pizza—technology can level the playing field for people with disabilities in remarkable ways. That’s why we feel so strongly about website accessibility.

We can look at the past and the present for a pretty good indicator of what business technology will look like. Bleeding edge technologies today could spawn more common trends in the future that change the way we communicate and do business, and even change how we go about our daily lives.

When it comes to technology, your business needs a partner it can trust to help you navigate complex technology and use it to drive your business forward (as opposed to bloating things down and getting in the way). On top of that, everything needs to be secure!