Should You Consider Using a Voice Assistant for Work? 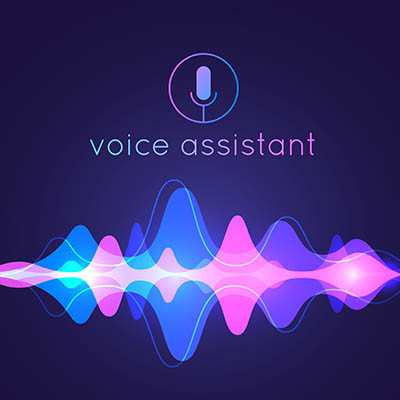 Once a novelty, voice assistants have become integrated into our phones, our homes, and possibly, even the office. Today, smart devices are found everywhere, and are some of the most sought-after products on the market. Would voice assistants bring benefits to your business? Let's find out by examining their positive aspects and drawbacks.

What are Voice Assistants?

You probably know their names already; Alexa, Google, Siri, Cortana, etc. While voice assistants were once novelties initially used to play songs or check the weather, they have evolved beyond being a one-trick pony. Voice assistants can now operate as the middleman between you and your smart devices. It can streamline many of the routine and mundane tasks you do every day. For example, they can perform household operations such as turning on lights, managing a thermostat, or even managing your home's security. Many can make and manage phone calls, or read, send, and reply to messages. Your voice assistant can also supplement your social media interactions by posting to Facebook and Twitter.

How to Make the Most of Your Voice Assistant

Manage the essential systems your home relies upon. The main benefit of your voice assistant is that it allows you to control other devices connected to your home. A properly configured device can perform a wide variety of tasks, including arming your home security system according to your preferences.

For example, most smart lighting systems, combined with the more common voice assistants, can utilize a “vacation” mode for when you aren’t at home. This will have them cycle through a typical nightly routine with your smart lights, making it look like your home is occupied to dissuade potential burglars.

This same concept could be applied to businesses as well, ensuring that lights get turned off at the end of the day, and turned back on before people start to arrive. If your storefront uses light-up signage, these could also be controlled and scheduled.

Increased Accessibility: Voice assistants can be an extremely valuable resource for people with disabilities, whether sensory, physical, or cognitive. Making voice commands is especially useful for those with visual impairments, allowing them to have more independence in their daily lives. Some valuable functions include taking dictation, making calls, accessing social media, and other types of communications. Android and Windows-based accessibility tools have been around forever, but are always getting easier and more accommodating for users that require them.

Reduce Your Energy Use. People often forget to turn off their energy-consuming devices when they leave their homes for the day... lights, thermostats, and other electronics and appliances. It’s not uncommon for people to adjust their timers temporarily and forget to return them to their default. Your voice assistant can act as a failsafe, programming it to shut off your lights, heating, and other energy-dependent devices in case you forget to.

Some Downsides of Voice Assistants

Security: Voice assistants, like all smart devices, rely on internet connectivity to function correctly. This goes beyond having an active internet connection. If your network isn’t secure, neither is your device. Over the last few years, there have been several cyberattacks that involve a smart device in some way or another. More often than not, it was due to the owners of the device not following basic security protocols.

Another thing to consider is, as we noted, voice assistants are internet-dependent; as such, the amount and quality of bandwidth you have can affect your experience.

Voice Recognition Isn’t 100 Percent: There’s no doubt that voice recognition has greatly improved over the last decade. That said, it still has a ways to go. This means that sometimes you may have to speak slower or repeat yourself to have the device understand your commands.

An (Almost) Always-on Microphone: Having a constant live microphone in your home or office can be disconcerting for many people. Many people feel that even when the microphone is off, and the device is turned off, the devices are still listening. This is partly because when they surf the internet, they believe they see ads and content based on their conversations when their devices are supposed to be turned off. Interestingly enough, this is often due to other devices and applications listening and watching our conversations. There was a class-action lawsuit a couple of years ago where smart televisions which, as far as most users understood, did not have any sort of voice-recognition feature, were in fact recording conversations and sending information to advertisers.

This is why a lot of security-minded individuals, like some of our technicians, choose not to have these smart devices in their homes. It just feels icky and invasive. It doesn’t mean someone on the “other end” is listening to your active conversations, but it can mean that your usage of these devices can contribute to targeted ads.

Like all smart devices, voice assistants are gaining momentum, expanding far beyond sitting quietly on a desk. Not only do they appear in a variety of devices, such as automobiles and smart appliances, but they are also becoming the primary selling point and feature in marketing campaigns for an increasing number of consumer products.

While voice assistants are most often associated with consumers, they are strongly represented in the business community; as such, all the benefits and concerns should take on an increased urgency. We can help your organization automate and utilize smarter technology solutions that help you do more with less. Call 607.433.2200 today to schedule an appointment.