Your Business Can be Cyberbullied 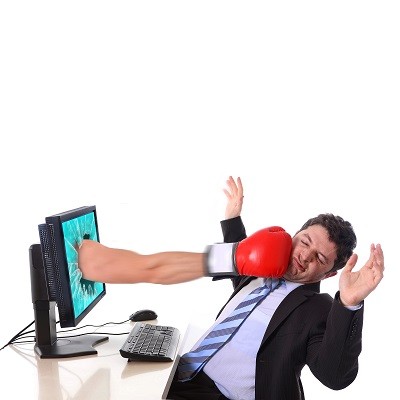 While the issue of cyberbullying is often associated with young people, in reality it is a phenomenon which transcends age, gender, and class. The 24/7 online, anonymous, and always available without respite virtual environment has changed not only how we communicate with each other, but the mores of society - including the business world.

Cyberbullying is unwanted contact and communication that uses digital devices and media to send or post negative, false, or harmful content. The goal of cyberbullying is to embarrass or humiliate the target.

Some digital tools used by cyberbullies include:

While “traditional” bullying is no less dangerous and harmful, it requires some level of physical proximity to the victim to be truly effective. Due to this, there are more opportunities for authority figures to intervene using a number of de-escalation and separation techniques. In traditional bullying, there are often opportunities for respite; not so with cyberbullying

Cyberbullying co-ops the way people communicate and share information with each other, using technology designed for engagement as a weapon. This is particularly effective against young people, transforming a tool to ‘keep in touch’ to one of harassment. Worse, it uses the addictive nature of the smartphone and social media, which keeps victims from being able to just disconnect from the Internet even when it hurts them.

One way to think about social media is that it is a type of ‘permanent’ record of your public activities. Whatever you post (or content posted about you or someone else) is available for the public to see. Yes, there are some security and privacy settings, but there is reasonable concern about how effective they are. There is no expiration date for something posted online and the ‘foreverness’ of the Internet is why cyberbullying is such an insidious method to victimize a person. Always remember: the Internet never forgets. This means that something posted months or even years ago can potentially be found with a search and damage your hard-earned reputation.

Why Is It Difficult to Fight Cyberbullying?

Three factors that make cyberbullying difficult to address are:

Adults and Businesses Are Victims Too

While cyberbullying is mostly associated with students, adults and businesses are not immune. In fact, when people use social media to attack a team member or business as retaliation against the owner or co-workers, they often do so using the same tactics a cyberbully might use to attack a fellow student.

With more and more businesses adopting BYOD practices, we shouldn’t be surprised that team members may be bringing issues of bullying into the workplace, or worse: finding the workplace the source of their harassment. A study that polled almost 3,000 people found that 96 percent - yes, 96 - had been on the receiving end of workplace bullying. While we might call this cyber harassment instead of cyberbullying, they are two sides of the same coin and need to be taken seriously.

As noted, businesses are not immune from being harassed. For example, a disgruntled employee can use an online career or review website, or even Google My Business to attempt to damage the reputation of his former employer by posting derogatory comments. This can be an effective assault, as Google pays attention to and offers reviews as a way to determine a company’s value. A negative review of your business is something to pay attention to, as it can affect your bottom line and your ability to attract talent.

Cyber harassment can have a tangible effect on a business’ brand in the same way cyberbullying can have on a person’s self-esteem due to the personal nature of the attacks. Just like posts about a person, posts about a business have the potential to live online forever.

There’s many a business who has that single 1-star rating from an unhappy former employee, which sticks out like a sore thumb and will never go away. The truth is, there’s very little a business can do to remove a negative comment about their business; they can only hope there’s enough positive reviews to outweigh the bad.

Some Remedies to Cyberbullying

One of the reasons it is difficult for parents or teachers to address cyberbullying is that the young people in their lives are usually the ones in charge of the technology. The lack of familiarity with the digital landscape often leaves adults unable to provide the support needed to help because they don’t understand what is happening until it is too late.

Business owners are often in a similar position, and also find themselves unable to navigate in the digital world where the rules of engagement no longer apply and anyone can have a voice - for good or ill. Fortunately, there are some things to support a young person or business who is being cyber-harassed. Here are some tactics from the stopbullying.gov website help students, adults, and businesses combat cyberbullying.