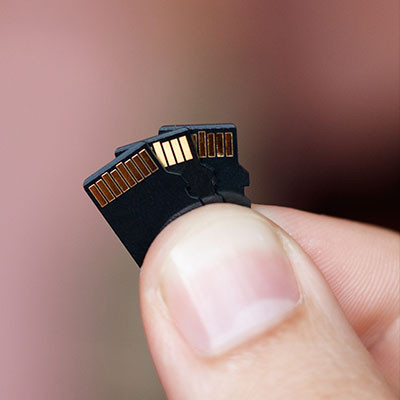 Last time, we broke down how much data is stored in a typical book, and how much data every book in the Library of Congress contains. This time, let’s really show you what that data consists of, and some other really neat comparisons to put things into perspective. Buckle up!

A Piece of Data is a Bit, but What Is a Bit, Really?

Last time, we mentioned that data is composed of ones and zeroes, called bits. There are 7 bits in an English character, and 8 bits in a byte. Why do we break down bits by simple ones and zeroes?

Throughout most of the last 70 years, and technically even before that, we’ve stored digital information in a very simple, easy-to-comprehend way. Imagine a row of 7 lights. Any single light can either be lit up, or dark. There is no in-between. A one, or a zero. Depending on which lights are lit and which lights are dark, gives you a different character. It could be a number, it could be a letter, or it could be a symbol. Now multiply that row of 7 lights thousands, or millions, or billions of times, and you’ll have a massive array of lights that can convey large quantities of data.

For the last 70 years, most of our data storage has used this concept, mostly by using magnets.

Inside the traditional mechanical hard drive are multiple spinning platters. To the common eye, they look sort of like CDs stacked on top of each other. They spin incredibly fast, usually at 72,000 RPM. On these platters are billions of tiny little magnets. There’s a little arm that floats just over top of the platter as it spins, and it reads and manipulates the magnets as you read and write data to the drive.

The sensitivity of this device is absolutely incredible. Imagine taking a single human eyelash, and holding it in the palm of your hand. Your hand wouldn’t even recognize its weight, right? If we were to cut that eyelash into 100 little pieces, and place one of those pieces on the arm of a hard drive, it would dramatically bend it. This arm is designed to detect forces billions of times smaller than that.

Kinda makes you realize the importance of data backup, right?

This miraculous little marvel of engineering has been the cornerstone of data storage in every single computer over the last several decades.

More recently, modern computers have started using Solid State Drives (SSDs) which store data as an electrical charge in tiny little transistors. These drives don’t rely on mechanical movement or magnets, which is much better for mobile devices as it uses less electricity and can survive being jostled around much more in your pocket compared to a mechanical drive.

Either way, these devices contain billions or trillions of pieces of information.

How Much Data Can I Hold in My Hand?

Take a look at the image above for this blog post. That’s a Micro SD card. Many digital cameras, smartphones, and other mobile devices use them to store data. At the time of writing this blog, you can purchase a Micro SD card that stores 1 Terabyte of information in a form factor that is about the size of your own thumbnail. 1 Terabyte could hold just under a 50th of the entire Library of Congress.

One of these tiny little cards can hold about a million books.

Dozens of these little Micro SD cards can fit into the palm of your hand—you could easily keep hundreds of them in your pockets.

If you weren’t the reading type, you could use your 1 Terabyte Micro SD card to hold:

How Much Data Has Humanity Produced?

We produce a massive amount of data. With more than 62 percent of the world population on social media, and 300 billion emails sent every day, information is constantly being moved around.

Every single minute, 500 hours of video are uploaded to YouTube. That equates to approximately one of those 1 TB Micro SD cards every minute.

Data is Critical To Your Business

Every day, your business generates data. Your staff sends and receives emails, produces documents, updates and stores customer information, and so much more. That data is fundamental to keeping your business operating smoothly.

That’s why data backup is so important. It’s so easy to lose all of your data. Ensuring that your data is properly backed up will ensure that you can continue operations in the event of a mistake, hardware failure, or major disaster.