Tip of the Week: What it Takes to Login to Windows 10 With Your Handsome Face

With plenty of new features to throw around, Windows 10 is shaping up to be quite the operating system. One feature that seems to have fallen off of everybody’s radar (so far) is Windows Hello, a brand new way to authenticate your PC login. By taking advantage of biometric scanning, your computer will let you log in just by looking at your face.

Microsoft has tried something along these lines before using their Kinect feature for Xbox One, but it was controversial upon release due to Kinect’s camera always being active, even when not in use. The Windows Hello camera will only be turned on when it’s actively being used, making it much less of a privacy issue.

Additionally, you can’t use Windows Hello with just any webcam. Windows Hello requires the purchase of an additional piece of hardware: a special RealSense 3D camera, priced around $100. PCs built for Windows 10 come pre-equipped with this device, with even more models adopting the RealSense camera in the future.

How Does Biometric Authentication Benefit Users?
In addition to using your face as a method of signing into your PC, Windows Hello also allows for iris and fingerprint authentication. Biometrics being readily available on Windows 10 is a pretty huge move on Microsoft’s part, and an important step toward leaving behind the password, a credential that grows increasingly obsolete as time passes and hackers grow more obnoxious. Dustin Ingalls, member of Windows Security Team, explains in a Microsoft promotional video the benefit of using Windows Hello biometric technology:

As a hacker, if I get ahold of your password, I can use that from anywhere. But with [biometrics]... the key is actually bound in hardware to my device. So the only way a hacker can use my identity, is to actually steal the device. When you use Windows Hello, not only does the attacker have to steal my device, but they also have to be able to use my biometrics. Which is super challenging.

Okay, what about a hacker simply using a picture of you to unlock the device? 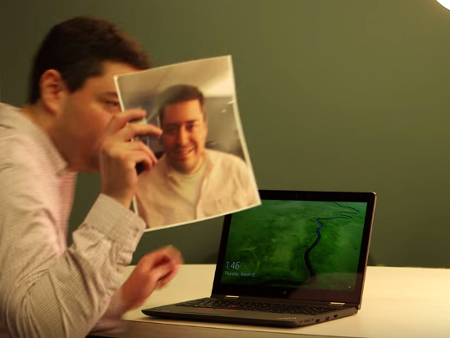 This is the reason why Windows Hello is only compatible with the RealSense 3D camera; it’s compatible with Microsoft’s spoof protection capabilities that require the user to turn their head. This is assumed to be for the purpose of looking for unique traits that distinguish one from an image of themselves. Of course, some potential issues will still surface. For example, how will Windows Hello keep identical twins from accessing each other’s PCs? Since the RealSense camera can scan a user for details down to their facial hair, its performance in the field might be a bit unpredictable for a time, though it will undoubtedly be more secure than the simple password.

Setting Up Windows Hello
It’s pretty easy to set up Windows Hello. All you need to do is go to Settings > Enable a PIN, then stare into the RealSense camera for a moment while it analyzes your face. Users with glasses will need to take multiple shots of the camera with them on and off. Once these settings are saved, an animated eye will show up on the lock screen. Look at it, and it will wink after it’s confirmed your identity. Windows Hello will then unlock your PC with a welcoming message.

Do you think Windows Hello is an important step toward eliminating passwords entirely? Let us know in the comments.