How to Make Sure Your Messages are Secure 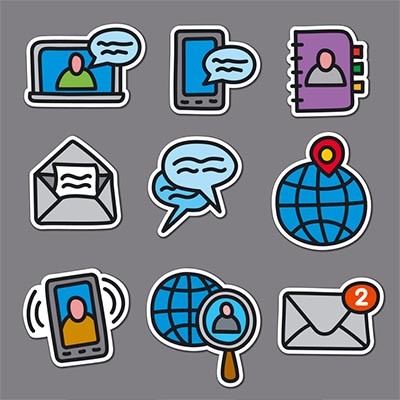 Messaging applications have carved out a foothold in businesses, clearly proving their operational benefits. However, it simply isn’t responsible to leverage a solution without making sure that the solution is secure. There are a few criteria that you should consider to determine how secure your chosen application really is.

The Criteria
When evaluating your messaging solution, ask yourself:

We’ll review why these questions are the important ones to ask.

Are my messages encrypted (and how encrypted are they)?
Encryption is a method of scrambling data so that it is incredibly difficult to interpret, accomplished through an algorithm known as an encryption key. Without going into too much detail, this makes any data that has been encrypted extremely secure.

Most major messaging applications use encryption today, but not all of them follow the most secure practices.

For instance, applications like Google Hangouts and Skype encrypt the messages that their users send… but also retain a copy of the encryption keys. This is so they can access the messages sent and collect data to power advertising. This also means that your data is left vulnerable if a cybercriminal makes their way into the application’s servers, or if the government waves a search warrant at them.

More common, fortunately, are apps that utilize end-to-end encryption, where the application only holds the keys that encrypt the data, accessible by the users. The users, on the other hand, hold the keys that decrypt the data again. As a result, not even the company hosting the messaging application can access the contents of their users’ messages, nevermind cybercriminals or law enforcement. WhatsApp and Signal are two apps that now leverage this approach. In fairness, Skype does offer this capability as well in its Private Conversation feature, but it isn’t enabled by default.

How transparent is the application to scrutiny?
Taking the developer at their word is one thing… it’s quite another for independent and impartial experts to be able to confirm the claims that are made about an application’s security. For this reason, applications based on open-source code are generally more trustworthy, as they are scrutinized by experts who discover and report any vulnerabilities.

A few applications provide their source code openly, including Signal, Telegram, and Wickr, while WhatsApp and Facebook Messenger don’t quite qualify but are based on the open-source Signal protocol.

If an application is closed-source, like iMessage is, a user is entrusting the developer completely to maintain the security of the messages sent.

How are messages deleted?
While sending a message securely is key, the security of the message once it reaches its destination should not be overlooked. After all, if someone without authorization gains access to the device later, encryption isn’t going to do squat to protect your data. However, if you are able to delete the message after it is delivered, security is suddenly much more likely.

Skype, Telegram, and Signal all allow a user to do so. In fairness, so does WhatsApp, but it needs to be deleted within 13 hours.

Some apps feature self-deleting messages, described under various names, that destroy themselves after so much time has elapsed. Signal has “disappearing messages” with a customizable time. As we have established previously, not all apps offer the same functions, and this does nothing to delete any screenshots of your message that the recipient may have taken.

How much metadata is kept?
In addition to the contents of your messages, you want to know that your chosen application is also protecting your security via the metadata it stores. Metadata can contribute to security issues through user profiling, as it includes things like the identities of both sender and recipient of a given message, when communications were made (and for how long), IP addresses, and even the kinds of devices used. In short, it can say a lot about you.

This is precisely why you want to make sure you know what data your messaging application will collect, as well as what it will preserve. This site offers a handy breakdown of many popular applications, broken down side-by-side.

Hopefully, this information will enable you to make the best choice for your business. For more assistance with your business’ security and operations, Directive has the IT solutions that you need. Call 607.433.2200 for more information.

More posts from author
Saturday, May 30 2020 2-Factor, 2-Furious - How 2FA is Our Last Hope
Friday, May 29 2020 What Are the Most Important IT Solutions for an SMB?
Friday, May 29 2020 Protecting Your Data Privacy Is Harder than Ever
Thursday, May 28 2020 Small Businesses Face Hard Work Getting Back to Normal
Wednesday, May 27 2020 Tip of the Week: Backup’s Value, in Two Scenarios